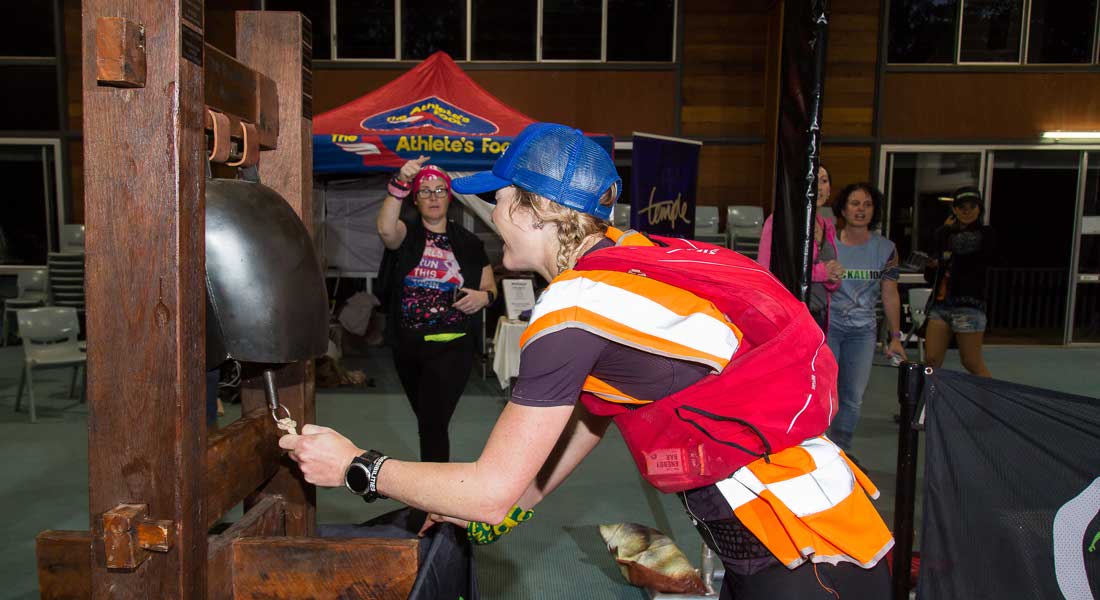 I don’t believe in heaven or hell but I do believe during the course of this race I visited some kind of hell on more than one occasion. Knowing I was in this uncomfortable place I had to work bloody hard to get myself out of it if I had any hope of crossing the finish line and ringing one of the most sought-after bells on the endurance circuit.

Over the weeks leading up to the event I became very interested in the weather in particular; rain, humidity and wind. I knew despite what some Queenslanders might say the temperatures were going to be warm to hot, warmer than Melbourne’s weather, after all we had just come out of winter.

Don’t worry about what you can’t control

The weather was one of them. What I was worrying about was an unhappy left hamstring, a tight right achilles, my monthly period and where could I get wholefoods and fresh organic vegetables around Mapleton days before the race. These things were definitely mind consuming but they were also part of the course so whilst there was worry and concern, I just had to keep telling myself it will all sort itself out in the end.

What I didn’t expect or even think I had to worry about was a cold. I hadn’t been sick in over 18 months and two days after running a relay leg of Surf Coast Century I came down with a cold. This cold saw me down and out for Yurrebilla 56km and stayed with me for about three weeks. After feeling less than average for what felt like the longest time I knew the week leading up to Blackall100 I was finally starting to feel pretty much 100%. Well that was until Thursday afternoon.

How to park a cold

I put my blocked nose, heavy eyes and throbbing head down to hayfever, unfortunately I wasn’t that lucky. I had a cold. The steps taken to improve the situation were simply:

But what was the absolute game changer in all of this was having a positive mental attitude; recognising the illness but not dwelling on it. I could not have something not even thought of previously unravel my race at this late stage. I simply had to park the thought of illness and get on with the race. This is the ultimate mind control.

When you speak of running a 100km people often look at you with bewildered amazement, confused by the want to run such a distance as well as being intrigued by how long such a run will take. Time is what confuses people the most.

Blackall100 took me 12:16:50 (3rd Female and 18th overall). I was only conscious of time twice; 40 minutes into the race checking into to see if I was on schedule plan wise and around 4 hours in when I made the grave mistake to look at my watch (something I rarely do when running). It was at the 4hour mark that I temporarily went into a space that one should not go into when running an endurance race; I started to calculate how much longer I would be out on course. The reality was I could have up to another 10 hours to run. 10 hours. How was I going to run for that much longer? Cue change of mind set.

To succumb to thoughts such as this leads you down a rabbit hole in which you might not be able to climb your way out of. Don’t give these thoughts any more time than they deserve, recognise the thought and then move on, quickly.

I have always believed that I don’t run well in the heat. If I was to run well in this race I needed to once again change my mindset for I was now running 100km in Queensland; it was guaranteed to be hot as well as humid. There could be thunderstorms and lots of rain. Deep down I was hoping this was the case. I run well in weather conditions that are less than favourable. They give me strength, I love fighting against the elements and coming out on top but the heat draws my strength away, I am left feeling weak and helpless. Well so I thought.

After a conversation with my personal trainer/friend she asked why does heat need to make me feel weak? Why can’t I see it as filling me with fire/energy instead. And with that remark my mindset changed. The heat was my power source and I was going to use it to my benefit not to my determent.

Endurance running is as much about physical training as it is mental training. Over the last year I have focussed my training inward in order to make me a more resilient and determined runner. I want to be a better, faster and more efficient runner and this cannot be achieved through physical training alone.

Temperatures hovered around 25 degrees, humidity over 80% and I felt every bit of it. We ran around Kondalilla Falls but it felt like I had run through them, thank goodness I was wearing moisture wicking clothing because this was a game changer no actually it was a life saver when it came to the successful execution of this race.

There was 3310m of ascent and 3290m of descent and as we climbed the Gheerulla Bluff the sun shone brightly, this was hell opening her gates and I was running no hiking through them. Fun, was I having fun? I had to tell myself I was, actually I really was. I thrive in the space of hurt, it’s a space that is helping me become a more planted runner.

I definitely suffered in this race more than the heat and humid adapted locals but my mindset helped me overcome the difficulty of what I could not control.

At times I feel like an outsider in an arena of runners who when I look at them are faster, stronger, more efficient and have a more graceful natural running style than me. But then I remind myself, that I am me.  This arena is exclusive, all you need to do is show up, show respect and always run your own race.

In order to execute my race plan, I had to run my own race. Be my own competitor. I could not get caught up in what everyone else was doing around me. I know I race better when I start conservatively and finish like a runner possessed. I like being the hunter but also thrive off being the hunted. This race hurt a lot. The mental scares of a race always take longer to recover than the physical ones but I am comfortable with that. I do not shy away from being uncomfortable for this is a weapon that is now seeing me improve and make my way up onto the podium.

This race saw me run alongside and around a group of women who I now refer to as mountain women; strong, fearless and determined all of whom definitely pushed me to my limits.  I was spent when I crossed the finish line, I ran to ring that bell like I had no off switch, actually I couldn’t stop. For 30km I had pushed and pushed and pushed, how can you calm down a mind that has been ‘on it’ for so long? When I stopped my body took a while to find calm, after a few hours it went into shock. I finished my night wrapped around the porcelain bowl throwing up all the impurities of the race; this was my cleansing ritual.

No one said this sport was attractive. Its raw, it hurts and it doesn’t always finish with a glass of champagne being raised. But what this sport is fills me with happiness, peace and rewards that give me more hope & determination. Someone said to me ‘you are getting better with age’ and I couldn’t agree more. I finally understand that I am not an outsider, I am me and this person runs 100km races with a sense of belonging, respect and grit.

To find out how I can help you become a more Planted Runner click here.

How to recover as a Planted Athlete
How much do you trust yourself?