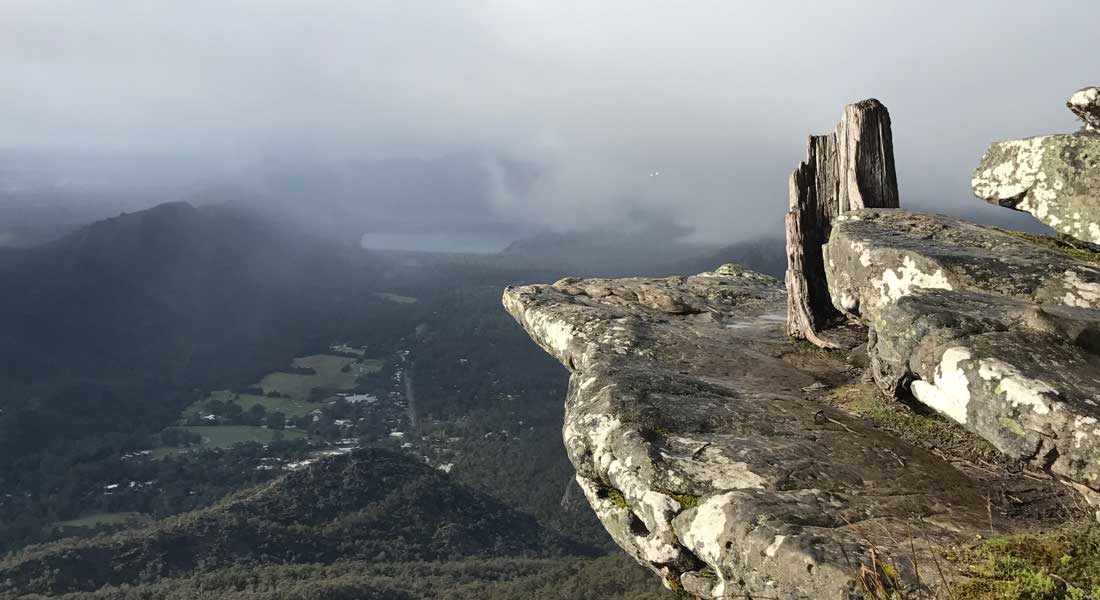 How to run Wonderland Rosea Run

How to run Wonderland Rosea Run

I am very clear on what my strengths are: hiking a mountain with purpose. Then on the flip side, I am very clear (almost too clear) on what my weaknesses are; technical downhills. But this race the Wonderland 36km Rosea Radness made me question my ability to be able to run full stop.

I knew very little about this race other than it had 1338m elevation gain/loss, a maximum slope percentage of 27.2% – 32.8%, started in Halls Gap and went up a mountain called Rosea. At the time I thought that was all I needed to know.

Hike the shit out of it

I have often said ‘ignorance is bliss’ however on this occasion ignorance was not bliss, it was a steep learning curb, literally. I am the first to say I love a good mountain, as Kellie my coach says ‘just hike the shit out of it’ but within the first 3km of this race, I was almost done for.

Driving into Halls Gap the day before Zac and I couldn’t help but notice how quintessentially Australian this place was; gum trees, wattle and more kangaroos in the town than people not to mention emus, goats and wild deer. It was beautiful, how had we not been here before? We settled into a very cosy property which lined the 8km run course, so seeing runners go past got us very excited about the next day and running through this town.

The weather was unpredictable; the weatherman telling us that today there was only going to be a 20% chance of light rain, well that was a bit of an understatement. In the afternoon the clouds rolled in and the heavens opened up and Halls Gap soon became a mud pit with strong winds, eek was this what race day was going to be like?

The night before a race I normally sleep soundly but the howling winds kept me awake and I felt a mild form of panic roll over me as I thought about scrambling boulders and rocks that had as much grip as a banana peel. The alarm sounded at 5am and all was calm, the storm had passed and when I lined up for the 7am race start it was near perfect race conditions.

Unlike majority of my races, I started at the front, I felt I deserved to be there, well that was until about 2km into the race. The immediate uphill and countless stairs humbled me very quickly, it wasn’t like I was out of breath, I just didn’t have any power in my legs – I had no drive. My new found ‘racing’ mantra told me not to let anyone pass but as I felt more than one person’s heavy breathing on my neck, I moved to the left countless times allowing people who were clearly faster to pass. It was these moves that started to deflate my bubble.

8km in and my negative mindset was at an all time low, how was I going to complete 36km when I was struggling to run 8? This is when I needed to trust myself, trust all the advice that has been bestowed on me and most importantly trust my training – I was prepared, I just needed to start believing it. And with a comment from a fellow runner ‘its obvious you run hills, look at your calf muscles’ I felt a wave of confidence come over me and pushed on. Thankfully for me, the single track opened up and I didn’t have the mental pressure of holding anyone up.

Soon I was starting to enjoy myself, I felt warmed up, I was finding my groove and most importantly I trusted myself. Time to start racing. I took two wrong turns in the race and one turn had me squeeze under a boulder through a small gap only to look down and see a massive drop, yep this wasn’t the right way at all. Turning back on myself I noticed a train of around 6 people move in front and in my head all I could say was ‘shit, that wasn’t meant to happen’.

As we moved up and over Mt Rosea the trails started to become less technical, I was about to unleash the confidence I had lost during the first 10km of the course and by 16km in, I felt like I was flying. I was worried I was burning the candle at both ends here running at around a 4:48 per km pace but this is where trust came into it, this is what I had been training for.

As the kilometers ticked over I found myself passing more and more people, this made me smile. This is what I needed to happen, this is where I was going to be making up for lost time. As I ran into the last aid station at the Borough Huts campground I joked with fellow runners about wishing the aid station had a beer before someone said to me ‘yeah you might need it to get through the next part of the course’. Oh dear god, what was ahead of me?

My mind set was different now, it couldn’t be any harder than what I just experienced so quietly I said to myself ‘bring it on’. 23km into the run I spotted Zac in the background; he has surprised me with support along the way. I showed my shock of the race so far and spoke of the mountain climbs and technical descents all the while with him running next to me. I found more confidence when he said, “I have to turn around now, you are running too fast for me” excellent, I was on track. A few other runners had made comment that I was now flying after passing me as I slowly made my way down the mountain.

The backend of the course reminded me of the Surf Coast and parts of the Blue Mountains, I felt at home. As I made my way through the wide open spaces and trails I just kept putting a target on peoples back and running towards them and with any luck I would pass them.

The science behind training sessions

Sometimes you don’t understand all your training sessions; around 2-3 sessions per week I do speed work, hard and fast tempo and fartlek training and every once in a while I am challenged to run a 5km Park run. All this hurts. It hurts a lot. It wasn’t until the last 1.5km of this race did I understand why I do this type of training. I could see around 5 people in front of me on the home stretch and in order to make up valuable places, I needed to pass all of them. With my pain face on, I put myself into overdrive, mentally focusing on breath not the conversations of hurt and pain that my mind wanted me to focus on. It’s these voices in your head that can derail a race, lets the voices speak loud enough and soon enough you will listen.

It was this part of the race; I let my breath do the controlling. I was controlled but very much in the hurt locker. One by one, I was catching and passing my fellow runners and the finish line just couldn’t come soon enough. This race had me finish in an overall place of 51 out of 193 runner, 8th female and 3rd in my age category, 40-44. Time: 4:23:54.

You don’t walk away from a race like that without learning more than one lesson and this race was no exception. Will I be back next year to run the 36km and conquer those mountains? Hell yes, challenges are here to change us not deter us and already I am training to be stronger both up and down those mountains.