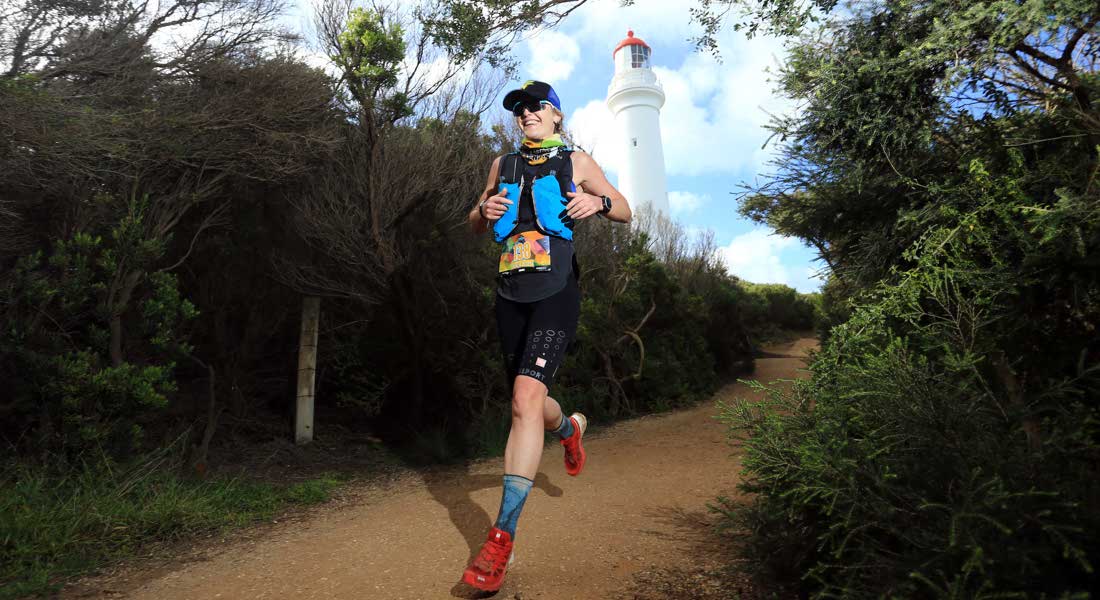 How to run the Surf Coast Trail Marathon

When I ran this race in 2016 it was my first race DNF. I struggled to make it to the 10km mark and somehow made it 27km before finally pulling the pin. I had been ill the week leading up to the race but was certainly well enough to tackle 42km despite an extra long taper, not so ideal fuelling and the sore throat and runny nose which by race day almost seemed non existent. For me what halted the race before the official end was a very unexpected stomach bug.

We all know the rhetorical question ‘does a bear shit in the woods’ well lets just say, I was a bear and as much as I respect nature this trail runner had to execute an emergency plan thankfully off course to see me make it to my support team to call it a day.

This year I had as you can imagine, unfinished business. I was a little nervous going into the race for two reasons 1) I didn’t want to be a bear again and 2) I had high expectations on doing well. As I have said since running Buffalo Stampede in March a few things have changed, the main being – I felt more like a racer than a runner.

The day was almost perfect down at Torquay; trademark sunshine, blue skies and high tides! Yes another surf coast race where we were guaranteed getting our feet a little wet over the course of the race.

I started well, feeling strong but not backing myself too greatly as I practically started at the back of the pack something I need to work on especially now that I am finding myself on the podium or in the top 20 finishers. Running a few kilometres at the start on soft sand I was sensible enough to pace myself after all these races I know what works for me, start slow, warm up, find my groove and finish strong. I passed a few people I knew within the first 5km who were as supportive as ever wishing me a good race. OK head down, time to race.

You don’t win a race by standing still

This was one of those races where I just ran within myself, I learnt a lot from my UTA100 race and whenever I found myself slowing down I just told myself ‘you don’t win a race by standing still’. So I pushed on and continued to trust, breathe, meditate, trust, breathe, and meditate.

Coming into Point Addis, the start of the half marathon distance I was holding my own but soon saw a friend and target who helped push me up the hill, down the stairs into the second half of the race. The second half is harder than the first, more inclines, more stairs and more sand plus it’s always been a goal of mine not to have any half marathons pass me before I get to the finish line – it hadn’t happened yet but surely this was my year.

The sand along Point Addis was soft, like running in quick sand but little did I know it was only going to get worse from here. Actually running through Bells Beach was a challenge so the surf coast had a few curb balls up its sleeve this year. Running into Anglesea was fun, as I drew closer to the checkpoint I saw an inlet in which we had to cross but before that I noticed people stopping. In my head I was thinking ‘why are they stopping, what’s happened?’ Then it dawned on me, the runners ahead of me were taking their shoes and socks off to cross the river. I could see and hear my supportive husband Zac yelling ‘ take your shoes off’ and for a moment I hesitated and then just went for it – almost duck diving directly into the water.

Is this a triathlon?

Taking shoes and injinji toe socks off meant losing time so wet feet it was, actually wet lower body as the water almost came up to my waist! Good times I thought. I muttered something like ‘this is hard’ to Zac before powering through the check point onto the next challenge – the long 4km stretch of beach from Guvvos to Urquaharts Beach also known as the King tide playground. As I came down the stairs I saw some poor runner engulfed in water and I don’t mean her feet, I mean her whole body, all I could see was her head. I was one of the lucky ones, I seemed to time the crossing of the beach perfectly – the waves were subsiding and I had enough time to get down on the beach and start running, the main aim here was to KEEP HIGH.

All I remember of this 4km stretch is me and two other runners both of whom where down low and fighting the waves. At this point the race felt more like a triathlon than a trail run. You definitely had to have your wits about you and be sensible, no heroics here. I do recall looking over and seeing only a head, one of my fellow runners along this stretch had gone down too low and was now paying the price – thankfully he saw the funny side of it and patiently waited for the water to retract before making it to higher ground.

4km of solid sand running done and I was making my way through the winding heathland and clifftops trails before anxiously looking for the key landmark – the Airey’s Inlet lighthouse. When you run in a straight line you set your sights on markers and run fast to them, on a windy trail you look for the highest point which happens to be a lighthouse and run hard and fast to that. I was pushing it this race but pushing it because I felt good. The trails were being kind to me today and I was taking advantage of it.

I started to pass a few people and had supporters on the sideline yell ‘Girl Power’ at the time I wasn’t sure what this meant. With one eye over my shoulder in order to not have any half marathon’s pass me, I powered on. As I ran closer to Airey’s Inlet two lead half marathon guys passed me, I was caught but I just had to ensure no other runners were going to do the same.

The last few kilometres to the Fairhaven Surf Living Club finish line had me in the hurt locker but I just had to keep pushing, you can’t give up even when the finish line is in sight. As I approached the last 500m I got swamped with my last wave and then it was up the stairs to the finish line. The race was over and I successfully made it to the finish without any physical mishaps.

I noticed there weren’t many females at the finish line and then it dawned on me that is why people we so excited to see a female, I had cross the line in 41st place, 3rd female and 1st in my age category (36-55) in a time of 4:09:12.

This was anything but an easy race; not only did the environment provide more than a few challenges but so did my need to race. I had an absolute ball running the Surf Coast Trail marathon, the course suits me, I love the unpredictably of this race and the organisers make it a race you look forward to coming back too. I felt pretty darn proud of myself to be the 3rd female to cross the line, by far my most successful achievement in a trail run and for me, it was pretty special accepting my prize in front of my coach, Kellie Emmerson and fellow trail buddies.

Until next year, see you on the trails maybe this time minus the king tide (actually I secretly love the king tide).

Are you eating enough Mother Nature?
How to run Wonderland Rosea Run