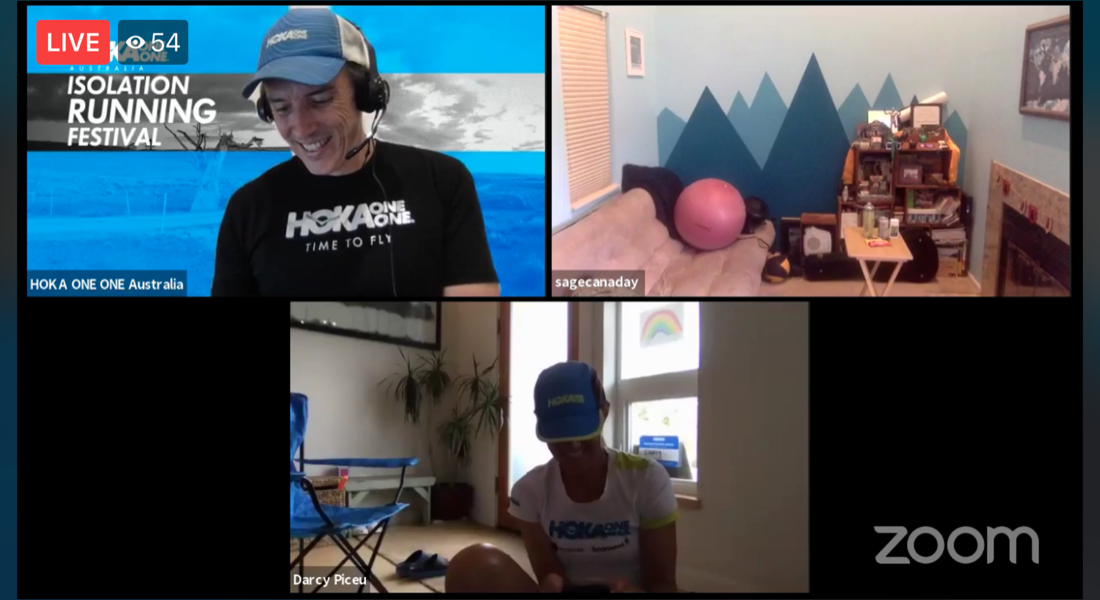 “Iso” has people doing some unusual and out of the ordinary things to keep themselves and others entertained. For the runners amongst us, in particular the endurance runners we are missing our long runs and the trails…well me in particular as I live inner city where the closest resemblance to a trail surface is where a telco or water company has dug up the pavement and are yet to concrete over it again.

As runners; whether road or trail we are also missing the atmosphere and excitement of a race. The goal has been set, we had planned our training and we were ready to sharpen our skills once taper week was upon us. Like many, I have had more than one race either cancelled or postponed which although initially lead to disappointment, this feeling quickly got turned around as I pursued other opportunities to help keep me run fit, strong and most importantly, accountable.

I was due to be running The Running Wild Wilson’s Prom 100km this weekend and although training had been slightly modified to now include more road & treadmill running I was in pretty good aerobic shape so I had to channel this fitness somewhere. And the Hoka One One Running Festival seemed the right fit. Timing is everything right?

I woke up early, around 6am and immediately noted how cold and miserable it was outside; an arctic blast was making its way over Victoria and my body was feeling every bit of the chill (all this road running has made me soft). I had made the decision to run the 5k on the treadmill just to mix things up a bit so felt some comfort and warmth knowing my day was starting indoors.

A bowl of warming porridge and a shot of beetroot juice followed by a 20min stretch & mobility session and it was almost show time. At 7:45am I logged onto the LIVE feed ready for the Welcome to Country with David King. This truly felt like a race now. Its these rituals that help give you greater appreciation for the land we run on, its more than just running; we need to be reminded of the history, the sacred grounds in which we leave our footprints and the ownership of these traditional lands.

This #isorunnigfest already had a different feel about it; it was so familiar yet being carried out with a completely different format. We were solo runners yet running with others.

At 7:50am I went to turn my Garmin Fenix 6 on and nothing happened, the watch I was planning on wearing for the events was suffering a momentary technical failure. I was frantic, tense and conscious the 8am virtual start gun was only minutes away. Holding back the tears of frustration, I wore my husbands Garmin 735XT but noticed as I was running frantically on the treadmill I had the watch set to the wrong setting, outdoor not indoor – I was running like a mad fool on the treadmill and the Garmin didn’t seem to be picking it up.

I eventually finished the race with a beating heart, weak legs and copious amounts sweat; I definitely ran faster but the watch said something different. Race 1 complete.

Had originally planned on running this event indoors but thought I would venture outdoors for this one, the weather looked reasonable after all and the fresh air and Vitamin D would do me good.

The plan was run down the street 300m into Albert Park and follow a circuit until I made it back home 10k later. The key with running Albert Park these days is to run not around the lake itself but on the outskirts where you can safely keep to the social distancing recommendations.

I had the LIVE feed airing with Kerry and Ali of SquadRun as they spoke with Mike Wardian and his wife as he was gunning for a 34min 10k. Let’s just say, I was never going to catch Mike but he was a bloody good virtual pacer along with his vizslar, Rosie. The banter was as entertaining and it was motivational, I felt like I was in a race despite having no one around me.

Feet up, fuel up and prepare for the biggest run for the day. Another local run and with the arctic blast still present I told myself ‘there is no such thing as bad weather, just bad clothing’.

A bowl of noodles with a dashi broth in order to get the calories in but not over fuel to make running uncomfortable. I had planned to have a gel or two during the 21k run as I was not so much fuelling for the half marathon today but fuelling for the 64k tomorrow.

I was setting off at the exact start time, I had my watch counting down and even got butterflies in my stomach minutes before take-off. I decided to mentally tap out for this run with music, 3 songs on loop. No PB’s for this run, I was running somewhat conservative.

No Sunday sleep in or breakfast in bed, naturally woke up at 6am and again similar routine to the previous day; porridge, beetroot juice and an additional kicker of Super Feast Chaga mushrooms to help with the boosting of my immune system; I was braving slightly outside of my postcode and needed to be prepared.

This ultra-distance was a self-supported endurance run; bladder filled with water and two soft flasks with the black gold (coke). I had gels and raw food bars; I was ready to run-ble.

I ran local within the recommendations of the distance from home; no more than 50km. I ran 25km oneway keeping on the side of the road where there were less people and hopefully less wind – I was running bayside and the weather was more favourable than the previous day but not the 14km/h winds the weather man has promised.

I had set my own rules for the day with the key rule being to keep a social distance of 1.5m at all times, I was not going to listen to music until I had reached the 42k mark, I was to fuel every 45 minutes and I was to smile and have a good time no matter what.

The race got hard at around the 49km mark and continued for another 5km but I just kept telling myself, one foot in front of the other; I had done the hard yards now was the time to appreciate and run within myself to the finish line. Why was a feeling like I was suffering? The bloody headwind…but as they say, half is easy!

As the HOKA One One team put it, ‘it was joyous suffering’ but for me, it was more joyous than suffering.

As a good friend of mine once said ‘if you are wearing a number, you are racing’ so with that, Hoka One One had created race bibs so I guess I was racing. Keeping to schedule and starting when the virtual gun went off, had me running with accountability, drive and motivation – I was not stopping for anything, well other than the few sets of pedestrian lights.

I had a steely determination for this run, I wanted to take each race seriously despite the fun everyone was having along the way. The Zoom feeds were entertaining; listening to other runners just like me openly discussing their race plans, their strategy and their environments; we were all in different places with different surfaces, elevation and support but we were all running as one.

All these runs felt different, no one that I passed knew exactly what I was doing but I did and this changed the way I ran especially for the ultra. I wanted to run long, run far, I had missed this. Hoka One One had given me an opportunity to fly and I wanted to spread my wings and do just that.

As it turns out, running free and running for fun had Hoka One One present me with “the greatest trophy any runner collected anywhere in the world this weekend” The Coveted Golden Kaha; my 100k Slam efforts had seen me take out first female place.

Nothing about isolation or social distancing due to this virus is right especially for those with a true love of the great outdoors. My freedom in nature has greatly diminished, I have not run in an environment where the wind, birds and rustle of the leaves beneath my feet are the only sounds I hear; natures call has been replaced with the constant hum of cars, trucks and trams.

Bitumen has been my friend along with a treadmill, running has taken on a new form but I’m still running, I can at least still run outside, I can continue to work towards my goals despite the goal posts for my races moving constantly.

My physical fitness is paramount but equally so is my mental health. Where would I be without the openness and opportunity of running, who knows. What I do know is; running has made me a heathier person inside and out and it’s the likes of the brainchild of Hoka One One Isolation festival that ensures I keep moving forward within a community that understands how important this is.

Thank you Hoka One One

It takes a lot to build up an atmosphere virtually but I must say, the Hoka One One Australia team 100% nailed it.  They understood the runner’s mentality, whether that be a runner on a treadmill, bitumen or trail; they know runners. they understood where we are all at during these very unprecedent times and they gave us nothing my support with lots of laughs along the way.

From the Hoka One One athletes, commentators and race officials you have done the brand proud and showed that during this time; it’s about continuing to build and support a community with strong foundations and crazy ideas because at the end of the day; we all fly as one.

Keeping Private
Here’s what happened at Planted Life in April