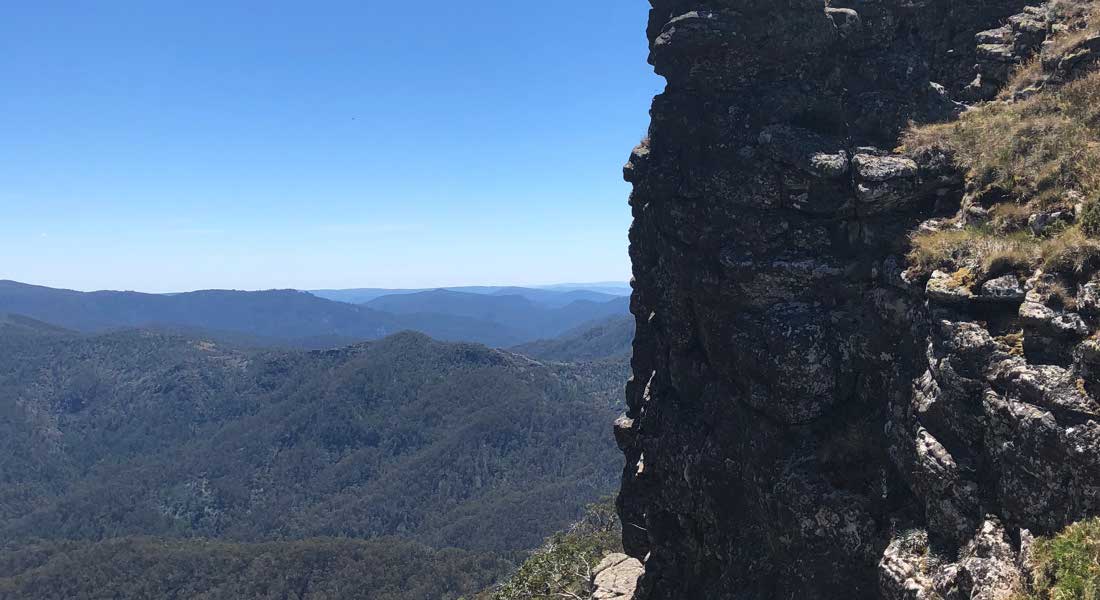 Oscars Hut2Hut is a 100km course that loops off Mount Buller Resort and into the Alpine National Park and the brain child of Andy and Michelle Payne, ultra runners and parents to two autistic boys, Oscar and Archie. When their eldest son, Oscar was diagnosed with Autism in 2011 and soon after their youngest son Archie they created Hut2Hut as a way of raising awareness for Autism and helping people understand the daily challenges faced by families such as theirs.

This running event wasn’t created to be like ‘other running races’ it was designed to be the most brutal endurance challenge someone could sign up for in Australia. It was designed to push people outside of their comfort zone.  A journey mostly along single track, including spectacular sections of the Australian Alpine Walking Track (AAWT), 4WD trails and linking together ten summits and nine of the State’s historical huts including Craig’s Hut of The Man from Snowy River fame. Touted by some as ‘Oxfam Trailwalker gone wild’ this course is both mentally and physically tough requiring long days on the feet, untapped stamina to climb extended ascents and the same amount of nerve to run along steep ridge lines. There is approx. 5600m of climbing and if participating in a team of two, you have 55 hours to complete this brute of a race.

Almost 3 months to the day on race day, Friday 16th February 2018 I had lined up for my first 181km race, GSER Friday 18th November 2017. As crazy as it sounds, I decided before tackling GSER that I was happy to have in the pipeline my first 100km race for 2018; Oscars Hut2Hut. There was something different about Hut2Hut, I wasn’t sure I was excited about this race more humbled by the message; this was an Alpine Adventure for Autism. It meant there were to be no bells and whistles, no competition with fellow runners, more mindfulness and appreciation for running this race for such a good cause. 2017 was the first year this race was run and from various articles written, in particular TrailRun Magazine Winter 2017 feature article Hut2Hurt I certainly raised questions as to whether I would be ready to run a such a tough course 3 months after what turned out to be an epic GSER.

10 ways to describe the Hut2Hut terrain:

Despite the harrowing climbs up to The Bluff and Mt Speculation, clambering the ridges of Crosscut Saw and pushing your way through the head height bushes of Mount Buggery there is something magical about this course, something that has you swept away with the beauty of such a brutal landscape. Not to dissimilar to GSER, I had become more familiar with this landscape than I cared to admit and at times when I felt isolated, I felt safe in natures ruggedness. Im not sure if it was the wild flowers, the aroma or the lack of wildlife – count for the 100km run, 1 snake but my heart was once again captured by the vastness of the Australian landscape; you can only see this beauty by foot and I was one of the lucky ones being nourished with appreciation for what I was able to run on. I fucking love this terrain despite the words used above.

On the back of our race t-shirts it reads ‘Juste une autre putain de montee” translated to “Just another fucking climb” the perfect event mantra for this race.

Turns out I was mentally ready to run this race but physically my body had another idea. Days before Oscar sounded the horn for the 5am start I had visited the doctor for a long overdue blood test. Unfortunately for me I was to receive a call from the doctor 24 hours after they had taken blood informing me that my iron levels were at an all time low and I was to visit their rooms without delay for an iron infusion. This is now the second time this has happened over a 4 year period but the only time where I needed my energy levels, red blood cells and oxygen flowing through my body more than ever.  This race was now going to be much harder than I anticipated or wanted. I was now having to work extra hard for the finish line.

My mantra for this race ‘let the finish line come to you, not the other way around’. Mentally and physically I was spent and I was at this stage not even 20km into the 100km race. I was now in survival mode, not at all where I wanted to be. I honestly thought I could get through this race telling myself I was Iron Woman but every fucking climb seemed to get longer, higher and tougher and my ability to stay strong was wavering. I am now weak with no energy despite eating every 45 minutes. I also couldn’t breathe.

As I made my way from Gantner’s Hut to Mt Speculation, a distance of only 9km I hit breaking point. I was cooked. Mt Buggery lived up to her name and the climb to then descend to the Mt Speculation carpark had me literally throwing in the towel. My mind was made up, I couldn’t muster up any more energy to keep going, I was not going to make it past Kings Hut to complete the race in one day so once I hit the checkpoint, I checked myself out.

If you want to know where the nicest people are in the world, they are at the Hut2Hut aid stations. What a welcoming, warm and special group of people. Thank you doesn’t seem enough to really show how these selfless individuals turned my race around, in particular Ali and Jamie Moxham at Mt Speculation.  From a cold glass of coke to a warm mug of black tea while wrapped in a blanket the power of distraction allowed me to think further about my DNF plus a text message to my coach Kellie Emmerson who by chance turned her phone on while she had reception and battery sweeping the back of the race to write back to my text message of despair to say ‘I’ll be there in 10 minutes’. Time was on my side despite me now standing still.

Kellie ran into the checkpoint along with around 6 other runners, took one look at me and said ‘Now what’s going on?’ Quite simply. I was cooked. I had no iron or energy stores to play with and I was suffering.  Her reply ‘Be ready to go in 10 minutes, I’m not having you DNF’. So with that, I swallowed a ‘toughen the fuck up pill’ and put on my battle head again, I just had to get to Kings Hut, 12km away, spend the night and begin again tomorrow. Easy.

Unfortunately I am human and this race identified a weakness that is still present. When the race got tough, when my body didn’t come to the party my mind checked out. This scared me. Scared me more than the last 6km of GSER and my crazy hallucinations!  It proved again that despite endurance ultra running being a solo sport, you still need some pretty darn special people around you to hold you up when you can no longer hold yourself up.  I owe my race finish to my husband Zac, to my coach Kellie and to those special volunteers for just being there. I also owe my mind for not overthinking it despite letting my guard down at the 59km mark.

How sweet is the finish?

I arrived at the Kings Hut at 11:30pm, 2.5 hours after the 9pm cut off. After warming up by the fire, fuelling with a vegan burger, I set up camp in the hut around 1am and rose at 4am before hitting the trails at 5am to complete the 100km course. This was the hardest and slowest 32km I have hiked, walked and run but after smiling my way to Craig’s Hut, Mt Stirling, Howqua Gap and up to the Mt Buller Summit to rip my page out of the book proving I had made my way to the summit, I flew with purpose to the finish line.

Literally flying, the last 1.5km to the Buller Village was my finest and strongest part of the whole 100km race. Im not sure if it was the downhill or the run to an open bottle of beer but I had finally found energy and legs and I was so happy to be using them. What a welcome sight to see Andy, Michelle, Chris, Celeste, Kellie, Tom, Dale, Ben, John and Paul at the finish line oh and my open bottle of Coppers Pale Ale although something was telling me I should have been drinking Guinness!

Always a lesson to learn

This race taught me more about myself than any other race. It taught me more about my mental strength, my resilience (& weaknesses) and that my struggles were only a drop in the ocean compared to those who live their lives with Autism. This race soon became about what I was running for, not what I was suffering. Like Autism, my iron levels need to be managed, monitored and kept under close scrutiny but it doesn’t stop me from living life, from exploring and from continuing to challenge myself with every endurance run I race.

I feel very honoured to have meet the Payne family and like the environment I ran that day, you have left quite the mark. I look forward to running the Alpine Adventure for Autism in 2019; this time finishing in under 24 hours.