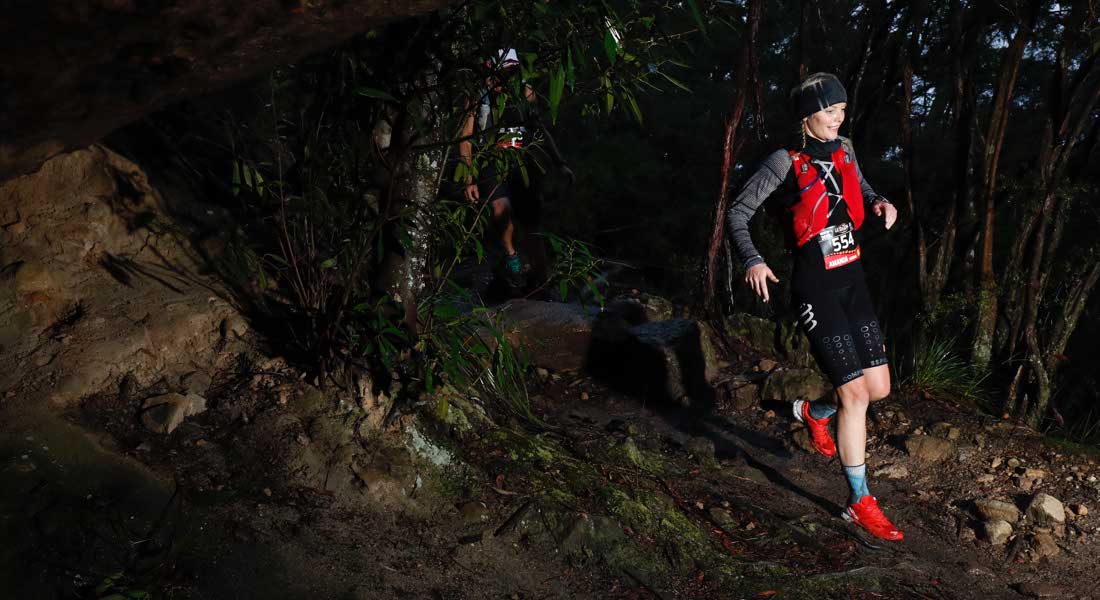 As a runner you are constantly reviewing which running conditions suit your style best; track, road, trails, mountains so in October 2016 when the entries to UTA100 in the Blue Mountains opened, I had to seriously think, was this race for me?

Despite participating in this race for the past two years and spending countless training hours in the Dandenong Ranges, Mt Macedon, You Yangs and the Alpine region (any terrain other than Beach Road) I still had questions if this terrain suited my running style. UTA is a combination of scrambling and climbing with a bit of running thrown in for good measure. You must like stairs, a lot of stairs and you should have some sort of agility and balance about you to feel comfortable and for me, I’m not sure these two skills were my strong points.

The last two years my finishing times were far from where I wanted them to be, the goal was to run this race in under 14hours which meant in 2017 I needed to run over a 2hour PB. A big ask. But not impossible. There are only possibilities. This is one of the lessons my late coach (#stillmycoach), Craig Percival taught me. He was also the one who said ‘maybe this race just doesn’t suit your style’. OK so it was more said to help ease my upset of not reaching my 2016 race goal but nevertheless it was one phase that stayed with me.

Running UTA100 in 2017 was different in many ways; Craig was physically no longer here, I was now training under a new coach and I had introduced into my weekly training schedule strength sessions and yoga practices not to mention was spending countless hours on active meditation and mind control something that was very new to me.

I started working with Kellie Emmerson UP Coaching in January and despite not knowing how this relationship would work out, something in my gut told me amongst the sadness of not training with Craig directly, I was going to be OK. And fast forward 5 months, everything is more than OK.

The 5 months leading up to UTA were anything but easy; between weekly strength sessions with Adam who seemed to know how to push my body in all the right ways, as well as finding a weird kind of satisfaction that simple tasks such as lifting my leg to get on a bike, holding a pen or even turning a door handle were a struggle these sessions were instrumental to how my body felt in this race.

In January when I started seriously training for UTA I was still seeing Matt, a sports doctor about a less than happy SIJ, I was still in maintenance mode only meant to increase my running distances by 10% each week and even doing a 5km park run was bloody hard. The thought of running 100km in May scared me but only I needed to know that.

My training schedule was somewhat different to what I had been use too, of course it was going to be and the first few months the hard speed sessions had me in tears of hurt but tears of sadness too. The thing about endurance training is; its humbling and painful, hard and rewarding all in the same breath and you need to be both physically and mentally tough to keep putting yourself through the training every week. Some sessions I had little trust in myself. I had so much doubt that seeing a session the included 3km at 4:20 pace frightened the life out of me. But Kellie trusted me. It was about time I started to trust myself.

Its only hard until it becomes easy

As the months went by the training became somewhat easier ‘it’s only hard until it becomes easy’. Don’t get me wrong all the sessions were still challenging but three things changed; I was becoming stronger, faster and I was learning to trust myself. The last point was the game changer.

I participated in two races prior to the ‘A’ race of UTA; Sharpy’s Beer 21km run and a week later Buffalo Stampede marathon. Both saw me on the podium – 3rd Female and 1st age group 40-49 respectively. Now this was a surprise. Well it seemed only to me. The people around me saw this building and coming, seemed I still had a way to go with regards to trusting myself.

I was cool, calm and collected leading up to UTA; I guess because sometimes you feel like the day is never going to come around. The morning of the race as I approached the start line I was nervous, extremely anxious and I was sad. So many emotions bottled up that seemed to just flow over minutes from the start line but now was when I needed to be strong. Expose and nurture my weakness and the day is over. Time to be strong. Time to be phenomenal.

I went into this race with a plan, well three plans; race hard, race strong and the most important plan of them all, come in under 14hrs. The day before the organisers had the long and tough job of relaying to all the participants course changes due to the inclement weather being blown into the Blue Mountains area but this was not to ruffle me. Worry about what you can control, not what you can’t. After 2 years of running this race, it was about time I had some not so ideal weather and a little rain and wind need not worry me, after all I had been training in Melbourne for the past few months!!!

My race plan didn’t include running to a pace, this kind of terrain and race is very hard to pace but what I did plan was the times in which I would be at the various check points. After the last checkpoint, which was 78km into the race, I was where I needed to be, now all I needed to do was run the last 22km in under 3.30hrs.

Physically I didn’t realise how strong I was until I had finished the race. I find it hard to blow my own trumpet when it comes to how well I am doing or what shape I am in; it’s always easier to be hard on yourself to avoid disappointment but I felt the strongest I have in this race and this meant something to me. My hard work was paying off.

Mentally I only thought of three things during the race; Be present, focus on the out breath and keep moving forward. Unfortunately, the last part is where my race came a little unstuck. Checkpoints help break up a race, they are an integral part of the race giving you something to focus on and move towards but they also mean, if you spent too long at one – time ticks away as you are standing still. The golden rule of endurance, just keep moving. I had a plan for each check point but lost sight of the plan at CP4 and CP5, this ultimately cost me my goal of seeing my race time under 14hrs.

My mind set was everything in this race; keep a narrow focus on the things that are going to help you drive forward and for me, it was about being present, which meant not looking too far ahead to cause unnecessary stress. It worked. I can’t remember too much of the race other than;

Craig always talked about digging deep, going to a place you had never visited before and I thought I had done this in the Surf Coast Century 100km in September 2016 but the last 4km including the 951 steps took me to a whole another place. A place Kellie had trained me to be in over the past 5 months. As I hiked two by two and scrambled the furber steps my body started to go into shut down, I was violently dry reaching and trying to control a body involuntary convulsing and climbing at the same time, this is a new skill I can add to my endurance resume. A few deep breaths as I neared the top and the body and mind calmed down – I could see the bright lights, the last set of stairs and I was running the finishing shoot. I did it. I have completed my 5th 100km race and third UTA race.

Kellie was there at the end to give me a celebratory hug and the first words she said was ‘don’t be disappointed, I know you gave it everything’. My finishing time 14:01:14

Running 100km isn’t easy but I find comfort in this distance, I believe this distance suits me. Physically and mentally I am strong enough to handle the pace and time on course and as I always say ‘where else would I rather be than out in nature’. As always, this race had many lessons but no more so than the lesson that Craig taught me ‘only possibilities’.

It goes without saying the two people that had my back in this race were Zac and Kellie, I am in debt to you two for being as excited as I was to get the job done and to those who made me smile on course; Brendan Davis, Tegan Angel, Sally Jayne Coggins, Skye Meredith and all the runners I had conversations with – I look forward to seeing you out on the trails again soon.

How to make Hemp Seed Hummus
Powered by Plants Podcast