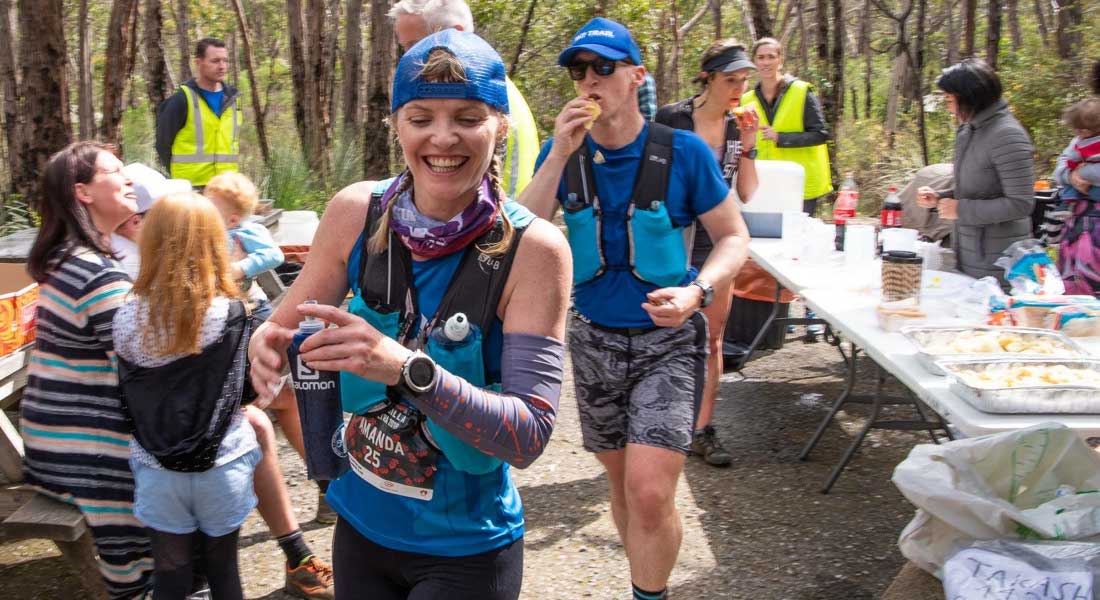 How to run Yurrebilla 56km

Passing through the Mount Lofty Ranges, the Yurrebilla trail runs from Belair Railway station to Ambers Gully traversing the hills face and through numerous conservation parks such as Cleland, Horsnells Gully, Morialta and Black Hill. Much of the trail consists of old fire tracks, road reserves and crazy single switch back tracks. Panoramic views of the city of Adelaide can be seen from most sections making this one of the most visually stunning trails to run.

Yurrebilla is held in September and each year you never know what to expect when it comes to the weather or course antics. Last year I was freezing after being caught in numerous rain and hail storms, I was chased by a bull and shocked by an electric fence. This year despite the forecast being for overcast conditions, it was blue skies, sunshine and much warmer than expected. This threw my race plan into some confusion. But thankfully no raging bulls this year.

I decided to run with 2 x 500ml soft flakes thinking that due to the cooler conditions I would not need to rely on hydration as much as I normally would in a warmer climate. Wrong. I should have run with a bladder filled with water which would have saved me time at the aid stations; stopping at aid stations means time does not stop, only you do.

The trails of Yurrebilla are hard under foot, its rocky and unforgiving at times and choosing the right trail shoe to wear is paramount for this race. I choose to wear a slightly more robust shoe as I thought having more tread would work in my favour especially on the downhill sections and to a certain degree it did but it also meant my feet had little flexibility which I believe contributed towards cramping in my left foot arch and calf around 6km to the end.

When I search for the definition of ‘cramp’ words such as: hinder, impede, inhibit, hamper, obstruct and slow are noted. This is exactly how I felt as I was descending into Foxfield Oval. I tried my hardest to refer the pain to somewhere else, this meant I started to flex and pump my hands helping distract the feelings going on elsewhere in my body. 99% of the time this works. I also talked nicely telling myself I wasn’t cramping….PMA (positive mental attitude) is also a bit of a game changer when it comes to overcoming hardship in a race.

Eventually the cramps subsided and I was able to finish the race strong.  I do believe the cramps were also caused by a lack of electrolytes in my body; I was mainly drinking water and coke which would have flushed out much needed electrolytes.

On a normal day I don’t consume caffeine in my diet. I don’t drink coffee or tea and I definitely don’t drink soft or energy drinks. However, come race day; I am fuelled by caffeine. From VFuel to a soft flask of coke towards the end of the day I find caffeine is the perfect rocket fuel needed to see me alert and finishing a race strong.

My own golden rule is to consume caffeine in the second half of any race, have it any earlier and I am likely to bonk before the race is over.  People definitely know when I have consumed caffeine, I am even more excitable and I have a look of determination on my face that can only be fuelled by the combination of caffeine and sugar.

For this race however, I was feeling far from strong and energetic from 20mins in and at around 14km I was ready to throw the towel in feeling like I needed to physically lift my legs to get moving – not at all helpful when the first part of the course is uphill. I debated with myself for a little while and decided to have a Revvies strip to give me some sort of boost. I was fuelling every 45mins with a gel but just felt like I needed more. At the 21km mark I came across a much-needed aid station and filled one of my soft flasks with coke – this was either going to be dangerous or a blessing in disguise. Thankfully it was the later.

As the race unfolded, I started to feel better both physically and mentally. I reminded myself of my mantra ‘Run mindful. Run free.’  I recognised the ‘down’ moment I was having and told myself it would pass, I just had to let it flow over me and not fight it. This mental process really works.

You can only keep a cold at bay for so long

The week before the Yurrebilla 56km, a race I had in the calendar since March I came down with a cold. This was bought on from running the relay leg of the Surf Coast Century in the cold, wind, rain and hail.

Knowing what was ahead of me the week before Sunday’s race I decided to park the cold ignoring the fact I was feeling lack lustre and just a bit behind the eight ball. I kept telling myself I was feeling good and continued to do as I normally do maybe with one or two slight modifications; go to an evening class of Pilates instead of the morning and do one of my intervals run sessions on the treadmill instead of around windy Albert Park lake.

Tell yourself something enough, you begin to believe it

I wasn’t sick. I didn’t have a cold nor did I have a hamstring issue that two days before the race made me book a last-minute appointment with a physio who I was hoping was going to tell me everything was OK, it was nothing major as yes it would settle down.  Thankfully he said all that as well saying ‘the worse thing I could do was to stop running’. I liked this guy.

Despite some of the hurdles being put in front of me, I was going to give this race a red hot go all the while keeping something in the tank as my ‘A’ race is in 3 weeks’ time so no need to lay it all out on the line  and do something stupid.

I am full of cold; my nose is running and my head is heavy. I am tired. And this isn’t just from running 56km. I have now given myself permission to be sick, I have a day or two of feeling down before I say again ‘enough is enough’. Being sick isn’t always a negative, it helps our bodies reset but being sick doesn’t suit me – I have training to do and another race in 3 weeks to run.

My goals are always rolling into each other but I never lose focus of the present moment. I loved running the Adelaide Hills, marvelling at the views, the wildlife, being part of the SA Trail running community, having the support of my family and running alongside my twin sister if only for a short time (she made me push hard to catch her before Black Hill). Adelaide is truly a special place to run.

Will I be lining up in 2019 to run my third Yurrebilla race? Absolutely, I now have more unfinished business….

Click on the links to read more about the SA Trail Running Community and Yurrebilla.

What to do come race week
What does a day eating a plant-based diet look like?